So what did the stock market think about S&P’s downgrade?  We got an answer today, in bright flashing red.  The Dow sank 634 points today – the sixth largest single-day drop in history. To be fair, the sell-off wasn’t rooted entirely in the downgrade (which was widely expected).  Rather, as I have written before, it looks like the market is simply playing catch up with (or going back down to) economic reality.  With a 90%+ rally, the market had simply gotten ahead of itself with unrealistic growth expectations.

What’s troubling is that the data has been even weaker than I expected – which is bad news. “Economy watchers” follow many different data points. Some well-known ones like the unemployment rate and GDP growth, however, are actually poor leading indicators – they are lagging and coincident indicators, respectively.  In other words, they don’t provide us with much new information about where the economy is headed.   While there are more leading indicators than anyone cares for, let’s just look at a few of the more common ones.

First is the ISM Manufacturing Index, this is a monthly survey conducted by the Institute for Supply Management that interviews “purchasing managers” at companies across the country.  This is seen as a gauge of the general spending and business activity that companies have planned.  Typically, a reading above 50 means coming economic expansion and below 50 signals contraction.

Second is Credit Spreads, which in this context means the differences between the interest rates that the government can borrow at versus what everyone else can borrow.  During periods of slowing economic growth, spreads tend to widen because investors will demand higher rates to lend money.  These higher rates can reduce spending activity, business profits, and economic growth in general.

And third is Initial Jobless Claims, reported weekly by the US Bureau of Labor Statistics.  This figure shows the number of people who are applying for state jobless benefits each week.  This leads unemployment and ultimately impacts consumer spending and economic growth.  Since the figure can be volatile, most people pay attention to the average level during the prior four weeks. Historically, an average above 400k has been consistent with a weak job market.  Figure 1 shows the changes in these leading indicators since the beginning of last quarter.

It’s really not uncommon for anyone indicator to suggest slowing growth and to end up being a false alarm.  However, when all the indicators suggest slowing growth together, the risk of recession rises, to say the least.  The fact that first-quarter GDP growth was just recently revised down to 0.4% (only a hair from negative growth) is not reassuring, and this week’s slide in the S&P 500 might is just adding fuel to the flame.

A 600 point drop can lead to itchy trigger fingers, and this may be an opportunity to pick off a technical bounce.  However, just keep in mind that the S&P 500 has dropped almost 30% on average heading into recession. 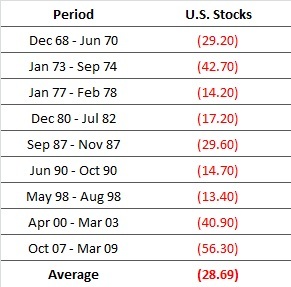 I’m not encouraging market or economy timing.  On the contrary, I’m advocating the importance of understanding the fundamentals.  Regardless of how the market moves, keep your eyes on the underlying economic conditions and market valuations.  Meanwhile, it won’t hurt to maintain a properly balanced portfolio appropriate for your needs.

This blog is for informational purposes only. Nothing on this blog constitutes investment advice. Bellwether Capital Management LLC does not provide tax or legal advice. You should conduct proper due diligence and/or consult with your professional advisers before taking any investment action.

Bellwether Capital Management LLC is a registered investment adviser. This blog's content is for informational purposes only and does not represent advice of any kind. View all posts by B C M