I’ve been asked several times what will cause the next major bear market, what’s the proverbial “next shoe to drop?”  In 2018 some thought Bitcoin’s collapse would be it and this year some are pointing at passive investing. While I think these issues could exacerbate market swings, that’s different from saying they will be the root cause of the next crash. That leads to the inevitable question of what will it be, then?

To be sure, I don’t know and nobody really does. Like many, I have my suspicions. The most suspicious being the circumstances surrounding “unicorns” or private start-ups reaching valuations in excess of $1 billion. I shared my thoughts on the topic in April this year and since then we’ve seen some red flags.

Next, as recently as summer WeWork was one of the world’s most valuable unicorns, valued at $47 billion.  However, its IPO filings disclosed more questions than answers about the company’s business and its founder/CEO Adam Neumann. WeWork saw its value plummet over 70%. The IPO was pulled, Neumann was ousted, and WeWork’s largest investor (Softbank) grappled control of the company.

These debacles were like slow-motion train wrecks so it’s not surprising how they turned out. What was surprising is how they were able to reach such spectacular valuations while booking losses in the billions. And it’s equally surprising how so many unicorns have retained their valuations despite the ugly haircuts on Uber and WeWork.

According to CB Insights the number of “unicorns” has reached over 400 with an aggregate market capitalization of over $1.3 trillion. Many companies expect to cash out on sky-high valuations by feeding shares into voracious equity markets. But that’s a lot of unicorn to stomach. As the ponies stampede for the exit, how many botched IPOs will it take before markets fully appreciate (or depreciate) the problem?

As long as unicorns remain private, they may seem like a concentrated problem for the VCs who bankrolled them. But it’s naive to believe an unraveling of the issue won’t have any spillover effects into public markets — on sentiment, confidence, and risk appetite in general.

There’s also the real-world consequences of a unicorn fallout. It’s not just VCs that will wear the haircuts, the ugly will cascade out into reality and onto the hundreds of thousands of employees, customers, suppliers, distributors, etc. depending on the companies.  The bottom line here is I think chasing unicorns off a ledge until abruptly woken from the fantasy is a more serious risk to the markets than bitcoin or indexing.

Another heavy shoe at risk of dropping, in my opinion, includes the uncanny rise of negative-yielding debt globally. Its very existence is an oxymoron that underminds our understanding of how finance is supposed to work. This is a relatively recent and quickly accelerating phenomenon, the consequences of which we do not yet fully understand.

One last significant risk I’ll point to is the ongoing US-China trade dispute. For once I think the level of media coverage actually corresponds with the extent of the problem. The global economy made a sharp reversal since the issue boiled over in 2017. 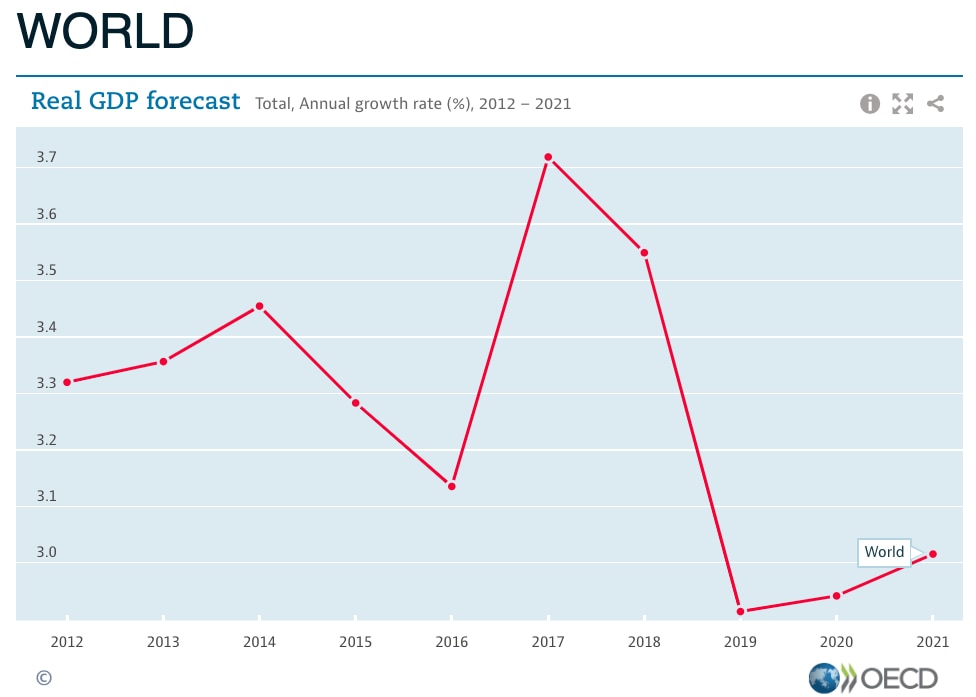 Global manufacturing has clearly taken a hit, but the effect on GDP has been limited as currency adjustments and profit margins helped absorb the blow. However, left unresolved the impact will spill over to hit jobs, consumption, and the greater economy.  That’s the stuff real bear markets are made of. Suffice to say the equity market is holding its breath and hanging onto President Trump’s every tweet.

I don’t mean to spoil anyone’s festive mood, I know the holidays are around the corner. The truth is I don’t know what will happen and I could certainly be wrong about all these concerns. So there’s no sense worrying yourself up at night. Besides, this is the time of year to focus on being grateful for all we have and all we have experienced.

Regardless of what the markets may bring, it will pass. But the memories you chose to make this season will last a lifetime for you and your loved ones.  So please take a moment to enjoy this most wonderful time of year, I wish you and your’s the happiest of holidays.