I’ve written the past couple of years that the energy sector is ripe with opportunity.  Simply put, we burn more energy than we have fossil fuel and that creates an obvious need for change.  I’ve stated my case for alternatives like nuclear and solar.  The long-term outlook for both are still positive, but we’ve already taken profits in both positions at BCM (it’s a good habit not to be greedy).

Besides, the move to alternatives will be a long journey completed in steps.  Along the way, transitional energies will have a place. Natural gas is such an energy.  It’s a fossil fuel and clearly not as green as renewable alternatives, but relative to other fossil fuels natural gas is cleaner, shown below in terms of emissions. 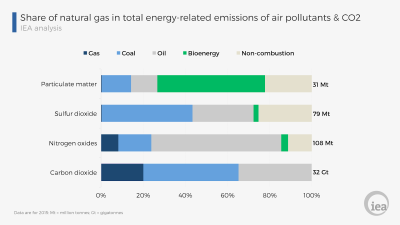 At the same time, levelized cost for natural gas is on the lower end among both conventional fossil fuels and renewable alternatives. 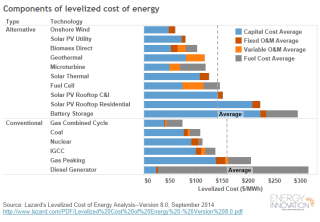 Topping it off, the world possesses healthy natural gas reserves, estimated at roughly 1.2 trillion cubic meters (tcm) as of 2016.  The Middle East holds the largest reserves at close to 79.38 tcm.  In comparison, US reserves are estimated at only 8.71 tcm.  According to the US Energy Information Agency, even that could support domestic demand for an estimated 85 years. 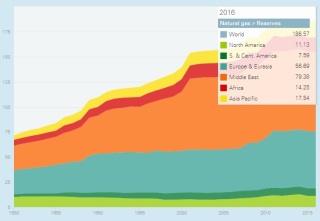 Source: British Petroleum
So, it’s only natural that natural gas should be a popular alternative.  Demand for natural gas has ballooned over time.  Not just in terms of absolute consumption, but relatively as well.  For example, the percentage of electricity made from oil has steadily decreased, while electricity from natural gas has increased. 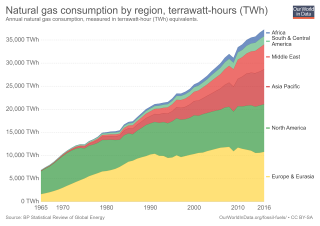 These trends are projected to continue, creating a generally positive outlook for the global natural gas industry.   Meanwhile, natural gas prices are down about 80% over the past decade.

According to the EIA, the price weakness is mainly due to excess supply.  Just as a shortage scare caused natural gas prices to spike prior to 2008, increased global production has caused prices to plummet since.

If this really is a supply and demand issue, the imbalance will sort itself out over time and prices will adjust. The case can even be made that production is actually lagging demand due to increases in domestic electricity generation and liquified natural gas exports.

Some stock price weakness was justified since weak natural gas prices did translate into weaker earnings.  That being said, with natural gas prices bouncing on what looks like a bottom, the worst may be behind us.  In fact, earnings for natural gas stocks have been improving over the past five years, shown below for the ten largest natural gas names. 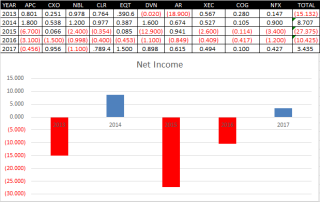 And though valuations aren’t outright cheap, they’re relatively attractive versus the energy sector and the broad market.  I’ve written a few times already that valuations look elevated across markets and the world.  It’s getting difficult to find absolutely undervalued markets, but natural gas looks like a relative value.

Source: Reuters, BCM
There are downside risks, of course.  Truth is I don’t know if natural gas or gas stock prices have bottomed.  If excess supply doesn’t correct itself, further price weakness is possible, or we may end up in a value trap (where prices just don’t rebound).
That being said, I think broad, long-term exposure to natural gas stocks at current prices or better will be rewarding over time.  As with any value play, be patient, hold on, and don’t bite off more than you can afford to lose.

This blog is for informational purposes only. Nothing on this blog represents advice of any kind. Investing is inherently risky and involves the risk of potential loss.