Egypt has been called the “cradle of civilization.” Egyptians are tied to some of the earliest forms of language, agriculture, and technology that’s known to man.  While the country has experienced its share of modern social and political issues, Egypt today is ripe with potential.  Consider the following characteristics.

Despite its potential, Egypt’s equity market has lagged its peers significantly over the past two years.  While the emerging markets index is up 60%, the Egyptian market is up less than 2%, shown below. 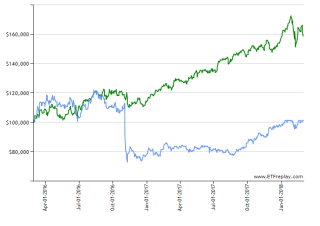 The sell-off in late 2016 resulted from a steep currency devaluation, exacerbated by a surprise Trump victory (his protectionist rhetoric rattled emerging markets at large).  But the underlying problems date farther back.  Following the Arab Spring and the ouster of long-time Egyptian President Mubarak in 2011,  Egypt was in disarray.  Leadership was uncertain, the economy stalled, unemployment and inflation spiraled out of control.

Ultimately, Egypt needed external support, like loans from the IMF, to engineer a turnaround.  Of course, that came with conditions, and the devaluation was a consequence.  Whether things are improving is a contentious topic.  The poor in Egypt have been hit hardest by inflation and devaluation, and it’s understandable that many have lost faith in the economic benefits promised by revolution.

On the other hand, progress takes time. It’s hard to see in the trenches, but a macro view provides a different perspective.  Egypt’s double-digit inflation is eye-boggling by US standards, but the reality is it’s already off its high and has fallen by half in the past year.

Other economic data coming out of Egypt has also been improving.  GDP growth is at the highest level in years.

Unemployment has hit the lowest level in years.

At the same time, consumer spending and credit are on the rise.

Valuation is more questionable.  I wrote in my January letter valuations are elevated around the world and I saw no obvious and compelling values (other than the VIX).   The Egyptian equity market certainly fits that mold.  I also wrote I prefer emerging market equities, relatively speaking.  I stand by that.  Within emerging markets, I still favor China and Russia, but my conviction is less strong than in 2016.  I add Egypt to my relatively favored list.  Though valuation is not absolutely attractive, they are relatively attractive versus the broader markets.

In addition to the obvious risks of investing in emerging market stocks, Egypt is clearly not out of the woods with respect to its own political and economic problems.  Any number of near-term uncertainties could send Egyptian stocks on another 2016-style stumble.  And with the return of global equity market volatility, we can expect a wild ride ahead.

However, long-run Egypt has strong potential for growth and development.  It will take patience and nerves of steel, but over time I think Egypt will realize the promises of that faithful Arab Spring.  Valuations are not as low as I would like, but they seem reasonable and at times like these, even that will do.

The bottom line, I think long-term, broad exposure to the Egyptian equity market at current levels or better will be rewarded.  If you take a position, do so over time on price weakness, and don’t bite off more than you can lose.

This blog is for informational purposes only. Nothing on this blog represents advice of any kind. Investing is inherently risky and involves the risk of potential loss.  Victor Lai is long EGPT.

Bellwether Capital Management LLC is a registered investment adviser. This blog is for informational purposes only and does not represent advice of any kind. View all posts by B C M