Last year when the 10-year Treasury yield breached 3% the markets were convinced the era of low long-term rates was over.  But yields are now back down to a 2% handle.  And just as quickly as some predicted 5% Treasury yields, some are now predicting 1%.

Fixed-income investors hungry for juicier yields may not like it, but  2% may not be so bad, relatively speaking.  Many developed countries are offering negative yields on their 10-year sovereign debt, meaning they practically guarantee negative held-to-maturity returns!  The table below provides some examples (keep in mind these are nominal yields, not adjusted for inflation).

Off the fixed-income menu

Relatively “not that bad” or not, the choice between 2% nominal and virtually-guaranteed losses is not appetizing.  Fortunately for those willing to look off the standard fixed-income menu, there are other choices.  One option is emerging-market (EM) bonds, which yield-wise, look increasingly tempting. Consider the following points below.

Of course, yields and spreads can always go higher, but we’re not trying to time a peak.  We’re simply comparing the relative attractiveness of yields.  And yields aside, there are other factors that could benefit EM bonds moving forward.

First, EM economies are obviously growing faster than developed economies and it’s reasonable to assume that trend will continue.  All else equal, that provides support for EM assets and that’s true whether global growth speeds up or slows down (as long as it doesn’t crash)!

Second, despite the fear-mongering about excessive EM debt, overall EM countries are actually in better financial health than their developed counterparts in terms of current account balances, debt to GDP, etc.

Third, EM countries have increased their use of local currency debt.  In the past, EM relied heavily on foreign currency (FX) denominated debt like the USD. This resulted in all kinds of financial trouble during times of economic duress.  Save for outliers, like Turkey and Argentina, EM countries have significantly reduced their dependence on FX debt over the past decade, which makes the debt easier to manage.

The fourth and last point is EM bonds may benefit from the recent change in Fed policy.  All else equal, a Fed rate cut would weaken the US dollar relative to EM currencies. That matters because, historically, emerging market bonds have had an inverse relationship with the USD.  A weak dollar can not only increase the value of translated FX coupons but can also benefit EM economies by loosening global financial conditions.

US DOLLAR VS EM BONDS 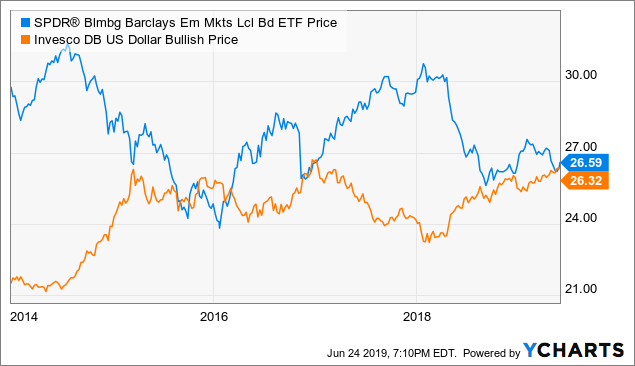 Any emerging market investment comes with risks and considerations.

The most obvious is a global economic slowdown that escalates into contraction. Several indicators have turned as of late (PMI readings, yields, sentiment, growth).  At the least, they point to cooling economic conditions. Of course, nobody knows for certain if a recession is imminent, but if a recession strikes we can expect EM assets across the board to be affected.

The FX issue pointed out earlier introduces a related risk.  Should economic conditions deteriorate, a global flight to safety would likely cause a spike in the USD, even if the Fed cuts rates aggressively.  That would magnify losses on EM assets at precisely the worst time, from a USD perspective.

An associated consideration is if EM bond exposure should be hedged, in USD, or local currency terms. While local currency provides the most upside, it’s also mirrored by the most downside.  Surprisingly, some investors may not even know what currency exposures they have to begin with (some of the most popular EM bond funds are denominated in USD).

And for those picking individual bonds, there are even more things to consider.  Beyond currencies, issues regarding financial health, economic conditions, inflation, credit rating, government policies, and social-geopolitical risks are all magnified when dealing at the country-specific level.  Keep in mind we have been referring to emerging market sovereign bonds, corporate bonds come with even more considerations.

I’m not suggesting we replace high-quality, developed market sovereign debt with emerging market bonds. The safety and correlation benefits of high-quality treasuries should always have a place in properly balanced and diversified portfolios, regardless of yield.

But in a world of low and even negative yields, it’s worth looking beyond the traditional, core fixed-come menu to consider adding alternatives like EM bonds to your allocation.  If you chose to take a position, do your due diligence, build it over time on price weakness, and don’t bite off more than you can stomach.

Bellwether Capital Management LLC is a registered investment adviser. This blog is for informational purposes only and does not represent advice of any kind. View all posts by B C M