Silver prices are down 70% from their 2011 highs.  Of course, there was a huge run-up to that peak and many people, myself included, thought a sell-off was needed.  But at this point prices have swung to the other side, and precious metals are now as widely hated as they were loved before.   How did we get here?

As a commodity, we might expect the primary driver of silver prices to be basic supply and demand.  Yet, the data show otherwise.   Silver supply and demand have been fairly consistent over the past decade.  Supply has had modest annual increases and demand has had a slight overall decrease.

Despite that, there has still been a consistent net deficit of silver during this period.  And despite that consistent shortage, silver prices have plummeted since 2011.  Clearly, there’s some disconnect between price and underlying supply and demand.

My guess is inflation and a good amount of speculation. Precious metals are seen as inflation hedges so speculators pile into them when inflation rises and rush out when it falls.  This relationship is shown below as silver prices versus US inflation since 1970. 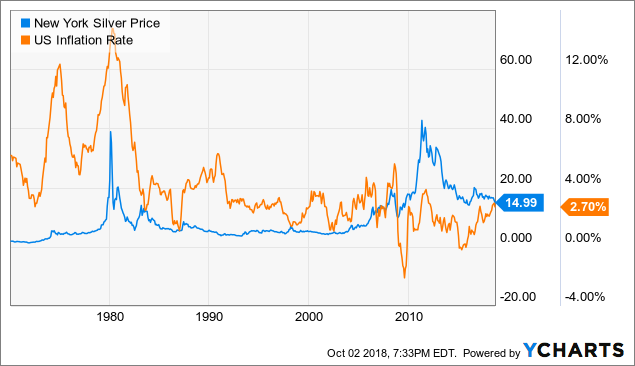 Silver prices spiked in the late 1970’s when inflation rose to double digits.  And like inflation, it collapsed and moved sideways for decades afterward.  The financial crisis of the 2000’s is even more telling.  Although silver prices rose during the crisis, they didn’t actually take off until 2011.  That was long after the crisis and bear market had ended.

Looking carefully, we see silver prices didn’t spike until after inflation bottomed and started to reverse.  In other words, silver prices were driven by inflation expectations, not supply and demand.

Of course, we know now inflation remained anemic, but in 2010 the Federal Reserve was neck-deep in ZIRP and QE, policies that were designed to stoke inflation post-crisis.  So, it was only natural for people to expect inflation to rise. Silver prices rose with those expectations and dropped when they were not met.

This is pertinent because inflation expectations are still low and silver prices are still under pressure. But the reality is inflation bottomed in 2015 and has steadily increased since.  At 2.7% CPI is still well below the long-term average of 4% and has plenty of room to move.  Add tax cuts, trade tariffs, a tight labor market, and a late business cycle, and we have a recipe for hotter than expected inflation with a side of silver upside.

The billion dollar question is when will it happen?  Honestly, I don’t know and I’ve always preferred valuation over timing anyway.   But that’s easier said than done for silver because precious metals don’t have earnings, dividends, or cash flows to value.

One reasonable valuation measure we can use is the gold to silver ratio.  The reasoning is that both gold and silver are limited, valuable resources with widely recognized monetary value, and as such the two should maintain some range of relative value (think currency exchange).  Over the past 100 years, this ratio has averaged 60.  In other words, gold has been priced 60 times higher than silver, on average.

Currently, the ratio is at 80.   This is the second highest reading since the end of the gold standard in 1973, and the average since that time is 47.  Based on gold prices of $1200/oz a ratio of 47 implies silver prices of $25/oz, and about 80% upside from the current $14/oz handle.  The table below shows a range of implied silver prices at $1200/oz gold.  This obviously very simplistic and  I’m not making precise predictions, I’m just pointing out prices look relatively low.

No pain no gain

There are risks, of course.  Not only are silver prices notoriously volatile, but rising interest rates create uncertainty.  Rising rates not only increase the cost of physical metal investing but also affects the relative attractiveness vs interest-bearing investments like bonds.

Rising rates in the U.S. are of particular concern because precious metals are denominated in U.S. Dollars.  All else equal, rising U.S. rates can strengthen the dollar and weaken silver prices. 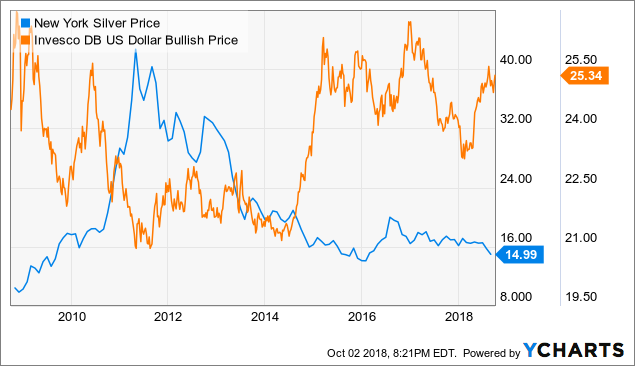 As long as rates rise because of healthy, real economic growth, silver prices may stay under pressure.  However, rising rates explained by hot inflation and widening credit spreads will be a catalyst for upside.  I think this is simply a matter of time, but there’s no telling how much. So, bids should be willing to buy, hold, and endure the pain.

I don’t know if silver prices have found a bottom yet, and those buying now may be in for additional downside.  However, I do see widespread pessimism, multiple catalysts for upside (inflation, risk aversion, dollar reversal, mean reversion), and prices that look low enough to consider. I think a long, patient position will be rewarded over time.   If you take one, build it on price weakness, and don’t bite off more than you can stomach.