This morning Ben Bernanke, Chairman of the Federal Reserve (the US central bank aka the Fed), delivered his semiannual report on monetary policy to Congress.  During the report, Bernanke said, “the possibility remains that the recent economic weakness may prove more persistent than expected, and that deflationary risks might reemerge, implying a need for additional policy support.”  That support could come in a number of ways, including the potential for QE3, or round three of the Fed’s controversial “quantitative easing” program.

If you’re wondering what in the world all this QE stuff is really about, then read on.  Quantitative easing is a process by which a central bank purchases financial assets (mostly bonds) from private sector banks.  By doing this, the banks are given cash in return for their bonds, which effectively increases the money supply in our economy.  “But isn’t the money supply already high,” you ask?  Why yes it is, very high.  Figure 1 shows the monetary base in the US from January 1984 to June 2010. 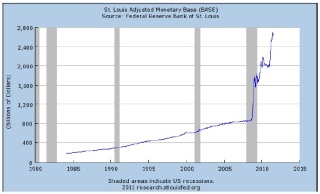 “Then why continue to increase it with further quantitative easing,” you wonder?  And now you’re asking the right question.  Here’s the answer that nobody wants to hear. The US government spends a lot of money, however, it only has two sources of income — taxes and borrowing.  When taxes don’t cover spending, the government must borrow. It does this primarily by selling US Treasuries to investors (government issued bills, notes, and bonds).  For example, by buying a $1,000 Treasury bond, an investor is lending the government $1,000 in exchange for a promise of future repayment with interest.

Of course, that lid doesn’t stay in place when the Fed prints money to buy existing Treasury holdings from banks, and the banks use the fresh cash to buy newly issued Treasuries. Hey, I guess it’s all good – I scratch your bank and you scratch mine, right?  The government bailed out the banks, so now the banks can bail out the government.  The bottom line is that the central bank is basically monetizing federal debt.  And while that is dangerous (not to mention technically illegal), it’s supposed to be “okay” since the Fed is not doing it directly — just indirectly through intermediaries (see Figure 2). 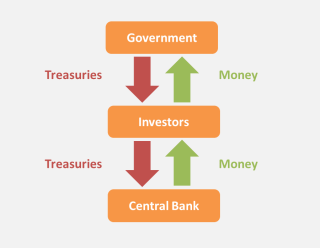 All technicalities aside, this whole system of government debt has always had shades of the world’s biggest Ponzi scheme. As existing debt payments come due for Investor A, the government simply sells new debt to Investor B to come up with the money.  The big difference here is that the Fed is now playing the role of the buyer of last resort.  And while that doesn’t change the reality of what is going on, it will certainly help the game go on for longer than it could otherwise.

As an aside, all it took was Bernanke’s hinting at another round of QE for stocks and risk assets, in general, to rally across the board in US markets today.  I think that basically sums up the consensus thinking among many investors right now.  It is one that is focused on finding any reason to extend the equity market rally we’ve had since 2009, instead of understanding what is really going on and what it means for our long-term well-being.

This blog is for informational purposes only. Nothing on this blog constitutes investment advice. Bellwether Capital Management LLC does not provide tax or legal advice. You should conduct proper due diligence and/or consult with your professional advisers before taking any investment action.

Bellwether Capital Management LLC is a registered investment adviser. This blog's content is for informational purposes only and does not represent advice of any kind. View all posts by B C M